First of all, let me say for starters that Portugal's ThrashWall, formed in 2015, is one hell of an amazing band. As the band's name suggests, they play an explosive type of Thrash Metal which is fast, aggressive and very riff-laden and isn't afraid of flirting with Crossover. These lads are driven to thrash our socks off, no doubt.

The band's self-titled, 8-track debut album caught the attention of The Metal Crypt and impressed us so much that we decided to contact the band for more info regarding their mind-blowing debut, how they came into

existence, the story behind the name ThrashWall, the Thrash Metal/Crossover scene in Portugal and what they have on their plate for the coming months.

Gonçalo Branco, one of the band's 6-string axe masters, took some time to enlightening us on these fine Portuguese thrashers...

Hey man, how's life in Évora, Portugal, these days? How have you reorganized your life when this damn virus is trying to beat all of us down?

Gonçalo Hello my friend, how are you?

Our town became much like many others, empty and everything closed. Everyone is trying to adapt to this situation, but it is totally strange.

Basically, we try to live our lives in the most normal way possible. Some of us are working at home and others in the field, trying to adapt the schedules of rehearsals to the confinement restriction hours. Sometimes it's possible, sometimes not.

THRASHING INTO HEARTS AND SOULS

As for more uplifting and joyful things, my sincere congrats on your brilliant debut album that truly thrashed my socks off. Can you tell us about the process of composing, rehearsing, and recording the songs? The album does not sound like it was put together in just a couple of days... ;o)

Gonçalo: First, thank you very much for that, it's really inspiring to see that our work is

And yes, you are right, it was a five-year job of composing, rehearsing, live performances and finally recording by the end of 2019.

We recorded and edited it ourselves in our studio and this process started earlier to perfectly capture all the instruments.

By the time the recording session started, the songs were fully composed and rehearsed, and we just let the energy flow and the magic happened.

When our other guitarist Nelson entered the scene, we added some leads to the final composition to finally complete the scene.

Could you tell us how you guys met and formed this band? Was it easy to find five like-minded fellows to play this type of intense and aggressive Thrash in the small town you are from?

Gonçalo: Most of us already knew each other from when we were teenagers, and yeah, being a relatively small town, the local metalheads were few, making it easier to find each other and share the same tastes and desires of having a Thrash Metal band. When we met, each of us was in a band, different genres but with the same influences.

began to take shape. To complete the lineup, we quickly reached out our brothers Luís Rodrigues (vocals) and Márcio Gonçalves (bass).

After a few years of rehearsals and live gigs, we felt like it was still missing a second guitar and that's when we called our good friend Nelson Coelho (guitar) to join us.

Do you have specific roles in the band or is each of you in an equal position to support all kinds of activities, be it making songs, writing lyrics, promotion, etc.?

Gonçalo: Relative to composing the songs, we try to have input from every member. For example, I, and more recently Nelson, come up with riffs or something and we all try to add/change something to continue with the composition, which is also the case with the lyrics.

The logistics, management and promotion parts are, for the most part, taken care of by Garras, with the help of all the band, of course. He owns the place where we have our HQ/studio/rehearsal room, where everything is ready to go.

Other members have other specific roles. For example, Nelson is the guy who makes the appointments for rehearsals and other activities that we have. Luís is our artist and made our first logos and artworks. Our newest member João Shadow is helping us with social media and interviews, along with me, like this one, hehe!

What are your personal influences?

Gonçalo: Fortunately, all the guys in the band have a lot of diverse influences, from Heavy 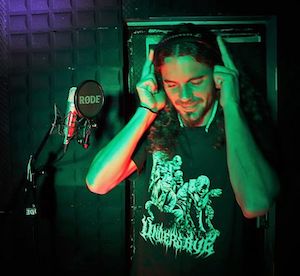 Metal, Rock, Blues or Punk to Black/Death Metal. Some are more inclined to the new wave, some more to the old school but the core and the thing we love and want to do is Thrash Metal.

A WALL MADE OF TRASH = THRASHWALL

When you started thinking of names for the band, did you try to find one that would best describe how the band sounds, hence the name, ThrashWall?

Gonçalo: When we chose ThrashWall to be the band's name, we were rehearsing at a big warehouse that we rented and divided the place with a friend who is a woodworker. To make that separation of the place and improve the room sound we built a wall with "trash", things we found or that were given to us, like sponges, pieces of wood, palettes, etc. At the time, we had tried a few names that didn't stick, but when we came up with ThrashWall we thought that, at least this one had a real story and background to the band's adventures and struggles to continue with the project and friendship.

Are you surprised by how well your debut album has been received so far or were you confident that fans would like it?

Gonçalo: Of course, we were very surprised at how the people reacted to our music. To be honest we never expected this kind of reception or for it to be so fast and for that we are very grateful. We have people from all over the globe talking to us and saying that they love our music, that's kind of the dream, you know!

How did you end up on Firecum Records?

Gonçalo: Through the underground scene and mutual friends, Pedro Junqueiro (Firecum Records), who we would like to thank very much for the opportunity, noticed and liked the band and got in touch with us to make

the proposal of releasing our debut album.

Were there other offers on the table from other labels?

Gonçalo: At the time of the recording and releasing of the album, we only had the Firecum proposal. After the release we had more. Unfortunately, we didn't know many more labels that we could talk to try to put out the record.

Your self-titled debut album has now been released digitally as well as on CD. Have you had any talks with the label about a vinyl version?

Gonçalo: Yes, thankfully the demand and purchases of the CD were through the roof very quickly, so the label proposed a limited-edition vinyl that will hopefully come out very soon, so be on the lookout for that because it's going to be a very limited edition and we think/hope they are going to fly fast, hehe!

Do you have any plans to shoot a couple of videos to get your band promoted around the world?

Gonçalo: Oh yeah, of course. We had a couple of ideas to make a video for two or three, even when our former bassist was in the band (who also had background in filming and had some ideas too), but unfortunately when the pandemic situation arrived, that ruined a lot of our plans, but we hope to have something to show everyone shortly.

THE UNDERGROUND METAL SCENE IN PORTUGAL

What is the Portuguese Thrash Metal/Crossover scene like? Are there some promising acts you can recommend to hungry Thrash/Crossover people? I just learned that Crossover/Thrash band Mindtaker is also from your hometown...

Gonçalo: Portugal is a small country but has a large and excellent underground scene, in some places with more inclination to Hardcore and in others to Black/Death Metal, with a lot of excellent bands like our brothers Diabolical Mental State, Medo, Prayers of Sanity, Besta and, like you mentioned, Mindtaker, in which I also am the guitar player. It is also composed of our brothers from our local group of friends, who share a lot of our influences, too.

GETTING ANXIOUS TO PLAY LIVE AGAIN

What are the band's next logical steps once this whole pandemic thing is just a bad memory? Quite obviously a string of gigs would be a nice thing to get arranged, so are you already working on that for 2021?

Gonçalo: Oh yeah, we are eagerly waiting for that time to come! Yes, we would like to do a proper tour for the release of the album when it's possible, a thing that unfortunately could not be done at this time. Of course, we also continue to work on new stuff.

How much do you miss playing live? I guess that's one of the most important reasons why you even play in the band, right?

Gonçalo: There's nothing like it! We miss it a lot and, of course, that's one of the reasons to make music and have a band but we to try not to be sad about it. We are trying to focus on the preparation and

rehearsal of the songs and shows so when we can play for all of you, we will be even better and with a lot more power than before!

I am also curious to know if you have some cool venues in your hometown where it's relatively easy to arrange gigs for Metal/Crossover bands or do you need to go out of town to play?

Gonçalo: Unfortunately, we only had one or two venues available in our hometown where we could play once or twice a year. Besides those, we had to go out to bigger cities where there were gigs available. Of course, this was before the pandemic, who knows if these will survive. This whole situation has not been easy for them.

Have you written and new material and does it continue with the same signature Crossover/Thrash Metal sound that was so strongly present on your debut?

Gonçalo: Of course, that's our genre and the kind of music that we love to make and listen to. We already had some material written and almost done before the release of the album, and some new stuff done since then that hopefully we can show to all of you in the future.

The future. I know it's hard to predict but I bet you might still have some thoughts as to what you'd like to achieve with this band?

Gonçalo: From my own perspective, I hope to be able to finally play for as many people as possible, in all the corners of the world. We want to spread our music, be able to be with all of our fans and continue to make the music that we love. Besides that, only the dream of that sweet Jackson Guitars endorsement, hehe! :p

I think that was it from me this time, thanks so much for having this chat with me, and in the same breath I also would like to wish all the best both to you and your band in the coming months. Let there be at least a little pocketful of nice rewards waiting for you guys around the corner. Any last comments?

Gonçalo: We would like to thank you very much for this chat and also to all of our fans for their huge and tireless support!! We hope to continue to make music that inspires and makes you proud! We love you and are eager to see you live in the mosh pit! Thrash 'til death!!